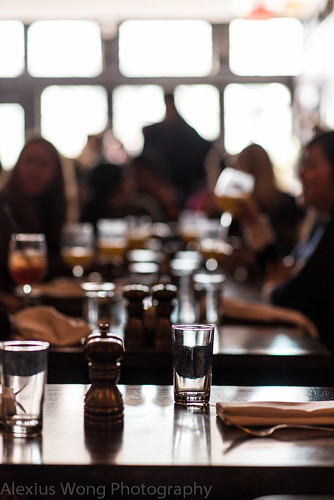 In my last posting, I mentioned exchanging a conversion with two couples in the same restaurant.  During the conversation, one of them mentioned Marvin, a restaurant with a Belgian/American mix in its menu, located in the busy U St. corridor – the restaurant is named after Marvin Gaye who lived for 2 years in Belgium in search for much needed solace and personal discovery.  Although my pals and I made plans to visit a Malaysian-style restaurant for lunch, only to find it closed for lunch (they were supposed to be open), I remembered the lady’s recommendation. So, here is a short blurp about what our brunch was like, not quite a full-fledged blog. 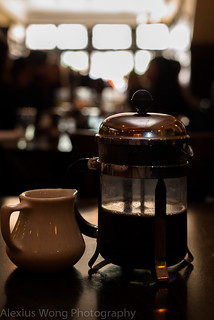 French Press Coffee:  This hot cup was not too bitter like American roast, but it had enough body with a mild hint of chicory which I love in my cup of java. 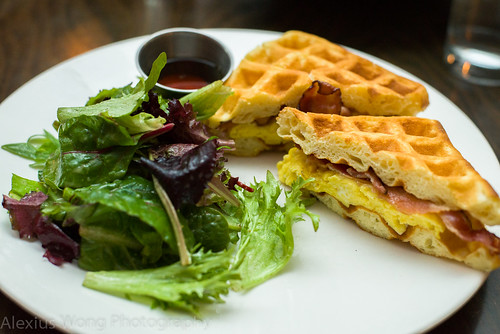 Belgian-American Breakfast Sandwich:  Bacon, scrambled eggs, and cheese came sandwiched by Belgian waffles, accompanied by a mesclun salad.   The bacon was exceptional with its tasty clean flavors, the egg moist with a touch of cream, but the ho-hum waffle was salvaged by the pure Vermont maple syrup exuding its coffee-like (yes) notes. The basic salad was elevated by the limey/lemony vinaigrette.  However, both my dining partners (they had the same order) were not impressed by the dish. 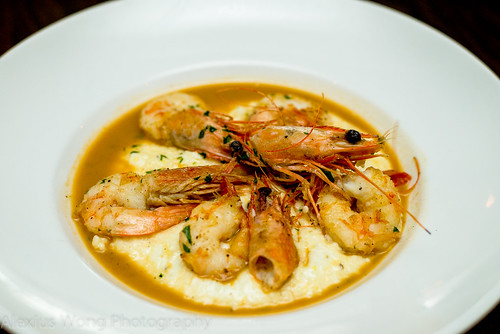 Shrimp and Cheddar Grits: This dish was recommended by the lady in the first paragraph, and I must say it did live up to its reputation.  The shrimp was plump and fresh, tasting properly seasoned, and the shell exuded notes of being grilled without grill marks, obviously from high-heat pan searing.  The stone-ground grits (the uneven texture was the giveaway) tasted rich from butter and the cheese, as well as being seasoned just right.  The pool of shrimp jus was the rich sauce that took this simple dish to the next level with the enriched stock packed with flavor steeped from shrimp shells.  The only thing that marred the near-perfect dish was the chalky quality from the larger bits of grits that were not fully cooked through.   Good grits take some time.

Marvin is a place for the hip and young that tries to create a juke-joint feel, especially with the loud music which encourages the crowd to indulge in the bottomless Mimosas. However, it is not a place to really focus on the food and to have a decent conversation without shouting across the table.