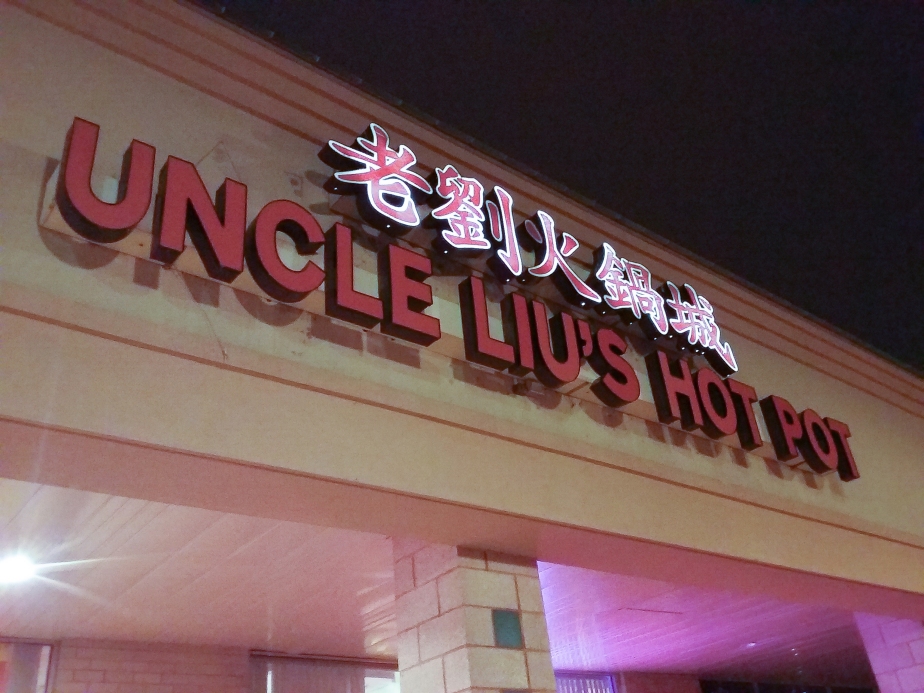 Last weekend, I invited my gang to a dinner a la Chinese, Hot Pot style.  For them, one was familiar with it due to his visits with me to Southeast Asia.  However, for the rest of the quartet, this was terra incognito culinary wise.  Located in Falls Church, VA, Uncle Liu’s Hot Pot is located in a strip mall off the main drag.  But finding it was quite difficult due to its ensconced location, and the fact that only the Chinese sign, not the English, had its lights functioning.  After the travel challenge, we entered its doors and after a slight wait, we got a table with a hole in the middle. 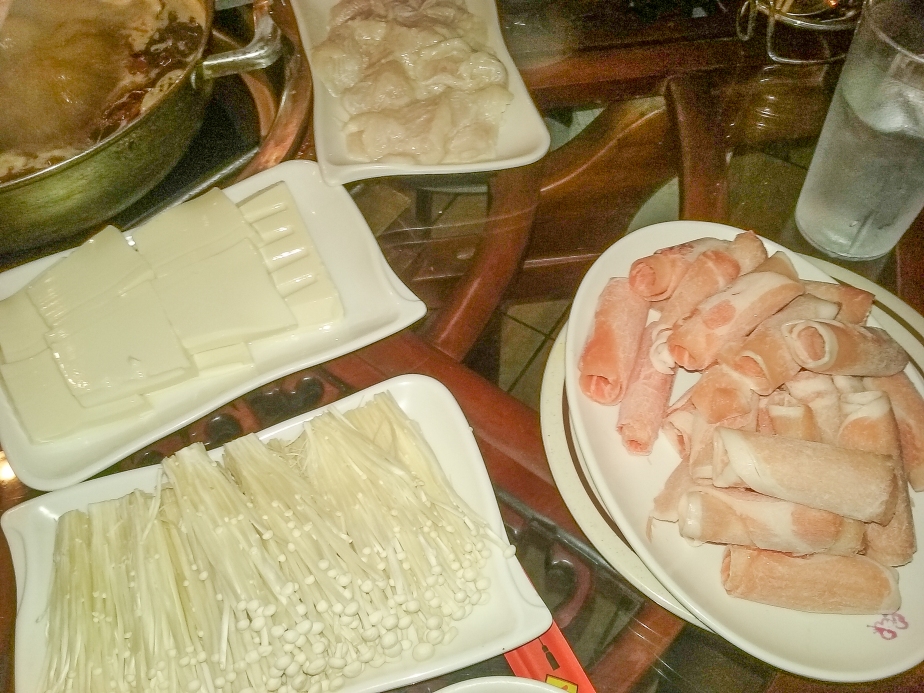 The heart of a Hot Pot meal is the stock that the raw ingredients are cooked in.  For that, we chose a ying yang of a mild bone stock on one side and spicy Szechuan on the other, much alike what I had seen on travel channels about this fadish dish in China.  The mild soup had pieces of tomatoes and green onions along with the common Chinese Goji berries that provided some mild sweetness as well as its antioxidant properties.  The spicy stock had bits of dried chili peppers and Szechuan peppercorns floating on a rather thick layer of fiery oil, a common trait of this dish.   The secret to partaking in this meal is cooking more or less one plate of ingredients at a time so that the diners could savor one type of dish.  After helping ourselves to the different sauces at the buffet table, we started the process.

The different ingredients were very fresh and most didn’t not take too long to cook due to their vegetable nature or the thinness of their slices.  The usual order of cooking the ingredients starts with the mildest tasting ones, proceeding to bolder tasting elements like meat.  So, we started with Flounder which was quite spongy from a thick coating of corn starch, followed by shelled shrimp (I prefer with shell) which was quite sweet. Following that was tofu which was silky smooth, and some Spinach leaves that were nice and turgid before wilting in the soup.  We ordered a plate of tomato pieces since the group was fond of it being cooked by the mild soup.  It was followed by the Enoki mushrooms with its mild and delicate taste, and some Snowpea shoots which imparted a mild yet discernible vegetal quality.  I introduced the lean pork earlier since I sensed some impatience on the part of the novices with the meat tasting mild for pork yet quite tasty.  The various sauces (Hoisin, oyster, sesame, bean) added the flavor to the naked flavors, and a special mixture of Hoisin, oyster, and green onions made by the owner was the highlight, but I still missed the Malaysian version made with crushed chilies, vinegar, sugar, salt and sesame seeds.  The noodles are usually cooked last so as to sop up all the richness of the stock after cooking the various ingredients.  This time we cooked them in the mild stock as my friend and I were getting bludgeoned by the searing dried chilies and numbing Szechuan peppercorns in the fiery stock.

This meal was an example of Cultural Gastronomic Relativity.  Firstly, the cooking in two stocks was the veritable cooking method, and the fiery spicy one was no way a dilution of the authentic version, although we were starting to suffer its effects towards the end of the meal.  The ingredients were fresh and the usual ones associated with this meal.  The cooking of single dishes was also the way to go, albeit a bit frustrating to some.  The serving of starch at the end is the common practice even though my friends were perplexed why they couldn’t have some of it earlier – they were tempted to order some rice which is not common with this style.  The meal was more vegetarian and pescatarian which was a bit challenging for the meat-minded eater.  All in all, we pretty much towed the authentic line with this meet-up.

Uncle Liu’s Hot Pot offers the veritable thing.  It may not be everyone’s cup of tea especially for the uninitiated ones.  However, it did convert one of my friends despite his initial trepidation.  If you are willing to try a new gastronomic experience, an authentic one it is, here is the place to visit, and you may enjoy this new style of cooking/eating.  Don’t blame me for suffering from the fiery stock – you have been forewarned!