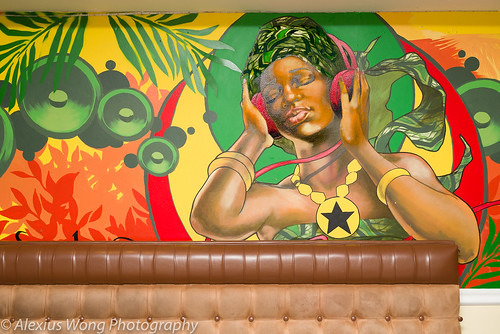 A couple of years ago, I visited a Ghanaian restaurant in my neighborhood that was known for serving authentic fare especially the well-known Fufu dish. However, I was not quite satisfied by the cooking in addition to the long wait for the aforementioned soup dish.  Recently, I came across an online offer to Appioo Bar and Grill located in the U St./Cardozo neighborhood, and judging by what I read on online reviews, I quickly snapped up the offer, and I made a trip to pay it a gastronomic visit last weekend. 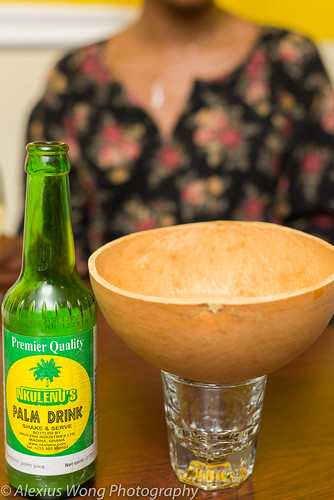 Located on the basement level of a row house on busy 9th street NW, close to the U St. junction, I walked in with a couple whose husband hails from Togo to get some guidance from him on this little-chartered culinary territory.  The shotgun space is decorated with a beautiful mural exuding some West African charm with its bright colors and design.  Having made a reservation, we took our table next to the long bar that seems to attract quite a local crowd.  After we placed our orders, my Togolese friend ordered Palm Drink, a typical libation from the Motherland.  One sip of it reminded me of the liquor toddy that I had tasted years ago as a child in Southeast Asia.  This bowlful, yes, a bowl perhaps made from wood or a gourd, had a unique flavor of sweet with a tinge of sourness from a slight fermentation but devoid of the booze that I remembered this drink is usually associated with.  Alcohol or not, it was a good starting thirst-quencher to this visit. 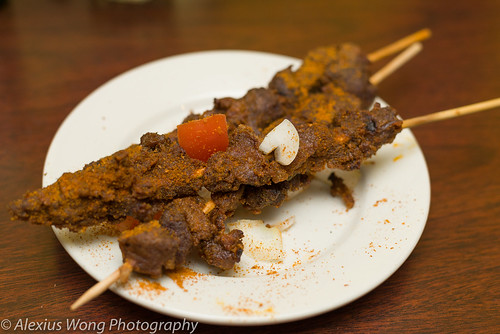 For our first bite, we ordered Goat Kebab or Chinchinga.  The sticks came filled to the brim with slices of meat, dark from its cooking, and slightly reddish from a sprinkling of seasoning powder.  One bite into it revealed what it was.  The goat was slightly tough with a bare hint of gaminess, nothing that belies its true nature.  What made it rise above it was the savoriness in the morsels due to a peanut sauce marinade and the spicy powder (called “kebab powder” according to my friend) that created a slightly masochistic tinge that beckoned for more bites.  Their tasty nature made for a quick disposal by the diners which created more anticipation at our table. 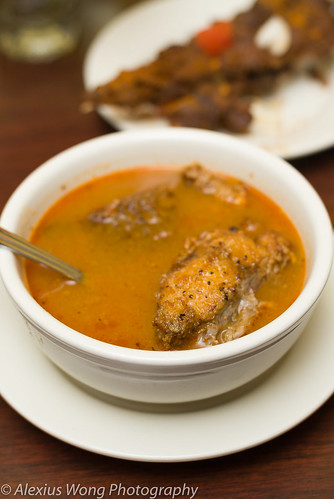 The next appetizer came in soup form.  Delicious Pepper Soup is well-known in this culinary tradition and I knew I had to give it a try.  A sip from the bowl pointed to a well-cooked broth that hinted of dried fish that I am familiar with, giving the soup some body and flavor interest.  The pieces of croaker were very fresh and moist, an indication that the fish was freshly cooked to order.  Unfortunately, it was that fresh that it could have jumped into the soup without being scaled.  However, I got around it by just removing the skin.  There was some good spice bite to the earthy broth, but I was hoping for something that was eye-popping like my grandmother’s pepper soup.  All in all, this was still good. 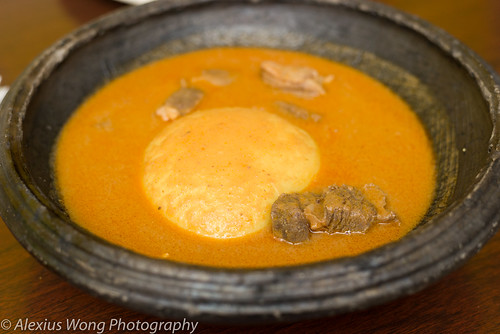 My friend’s order was Goat Fufu in Peanut Butter Soup.  It came served in an earthen traditional bowl with a ball of the pounded plantain starch in the middle, sitting in a pool of peanut butter soup studded with pieces of goat meat.  The fufu was the powder form, judging by the lack of starch-stretchiness normally found in the fresh version.  But it didn’t detract from the wonderful soup that had a light touch of peanut butter goodness without being overwhelming.  The pieces of meat were tender, for goat that is, an indication of a good stewing in the sauce, which made the dish even more appealing.  My friend originally didn’t want to order this ubiquitous dish, but at the end of his inhaling it, he was more than satisfied as it hit home for him, and he was about to go into a food coma. 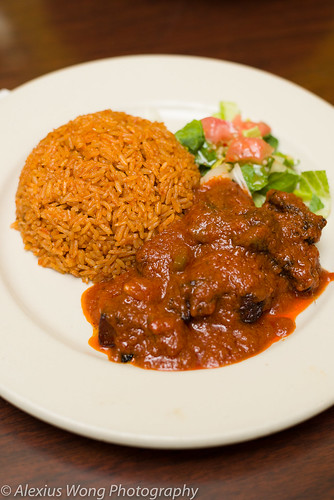 His wife’s order was something lighter and is as equally well-known as the above dish – Jollof Rice with Goat.  A stab at the pieces of goat pointed to the meat that was initially fried to a slightly crispy exterior then stewed in a tomato-based sauce. I enjoyed the meat texture that was complemented by the sweet-tangy sauce that was aromatic and tasting mild spice-wise.  Equally competing for my attention was the rice that was well-seasoned, tasting slightly sweet from the tomato sauce and onions, exuding vegetal notes of sweet peppers, and a note that was root or wood-like.  Upon talking to the chef, I found out that he added ginger to the mix.  Even though it was still mild, its savoriness made me return repeatedly to the rice elevated from the melange of flavors and cooked to a perfectly light fluffiness. 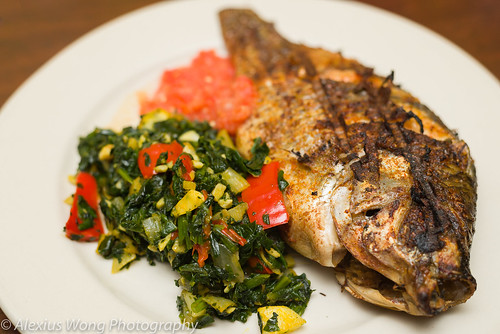 My order of Grilled Tilapia was nixed somewhere down the line.  It was forgotten amidst some confusion, and it was quite a wait as the kitchen was trying to make amends.  Finally, it arrived whole and grilled, along with a tomato salsa and some spinach as my choice side order.  One bite into the fish brought a smile to my face.  The skin was crispy and had a slight waft of ginger, perhaps from a rub of ginger juice, and the flesh was incredibly moist and sea-sweet, pointing to its incredible freshness as if just caught from the sea.  The belly was filled with a savory grated ginger stuffing that added more perfume to the whole mix.  Usually one that is not particularly fond of Tilapia, I was instantaneously attracted to the mild-tasting flesh, devoid of most of its inherent muddiness, and its alluring seasoning. A good partner was the tomato salsa that was really piquant, making it a ying-yang complement to the mild sweet flesh.  The spinach mix blew me away with its fresh flavors from the mild-tasting spinach leaves paired with sweet onions, a healthy dose of garlic, sweet peppers, and biting pieces of fresh ginger.  There was a note of an unfamiliar spice that confounded me, but the tasty mix constantly beckoned me to go back for more.  Undoubtedly, this fish dish was so good that it washed away any trace of my impatient wait, and I couldn’t stop exuding about it.  I stopped the chef, as he sheepishly passed by me, to personally thank him for such a wonderfully prepared dish, as he apologized for the dish’s tardiness.  All was well here after this scrumptious meal. 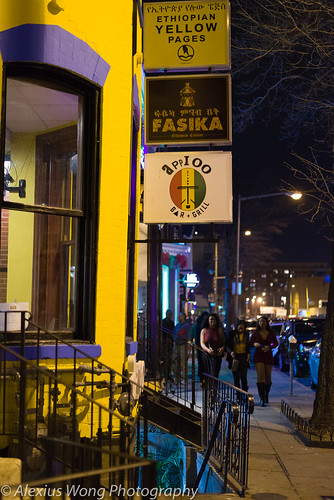 The dishes at Appioo Bar and Grill have given me a fresh perspective on what this Western African cuisine is all about. What impressed me about this visit was the completeness in the seasoning and the savoriness that each morsel or sip possessed, making one unable to resist having more of each dish. Additionally, what impressed me about the kitchen, despite the slight hitch in my order, was a deftly skillful hand that knows proper seasoning, the sourcing fresh ingredients, and that understands balance and ingredient pairing to produce wonderful authentic dishes that would not only satiate those with home-sickness but equally impress all including the novice like me. Yes, the reggae band was overwhelming in this small space (note: eat before 9 p.m. on Saturdays), but ultimately, such impressive cooking spoke volumes above the music. I will be back for more.